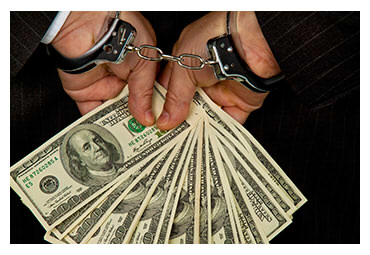 Embezzlement does not only refer to crimes involving large amounts of wealth. Misappropriating even small amounts of property or money can be the basis of a charge of embezzlement.

Note that Embezzlement does not require intent to keep the property. Unauthorized “borrowing” can also be embezzlement.

Here are some examples of embezzlement:

In California Embezzlement may be classified as a form of California grand theft or California petty theft, depending the property involved.

If the property in question is worth more than nine hundred fifty dollars ($950), or an automobile, or a firearm,then the embezzlement is a form of grand theft and is a wobbler in California law.

When the property involved is worth less than $950, embezzlement is considered a form of petty theft which is a misdemeanor punishable by up to six (6) months in county jail.

Legal defenses to a charge of violating Penal Code 503 PC embezzlement include: Good faith belief that you had a right to the property; lack of criminal intent; and false accusation.

WHAT MUST THE PROSECUTOR PROVE

The legal definition of embezzlement in California includes a number of elements all of which a prosecutor must prove in order to obtain an embezzlement conviction.

Let’s look a closer look at the elements:

The property was “entrusted” to you

A relationship or expectation of trust can be established through several circumstances, as in the following contexts:

For example, Jill is a teller at a bank.  Jill is entrusted with the responsibility of managing customer accounts and moneys.  If Jill takes money every day from each customer’s bank account and uses that money to pay off her credit cards, Jill is guilty of embezzlement.

In addition to a relationship which would suggest the delegation of trust, a prosecutor also needs to prove that the defendant actually had the trust or confidence of the property owner.

In the example above, Janet is hired to do janitorial work for a store for just one day.  Janet only works in the store when there are other workers in the store.  One day, the store owner temporarily leaves Janet in the store.  Janet steals a piece of jewelry.  Though Janet is guilty of theft, she is not guilty of embezzlement because there was no relationship of trust between her and the jewelry store.

Fraudulently taking or using the property

Acting fraudulently means taking unfair advantage of another person, or causing a loss to that person through a breach of duty, trust, or confidence.

It is important to note that a conviction for embezzlement requires that the defendant was benefited by the owner’s loss.

Consider the following example: John is the treasurer for a church.  As treasurer, John is entrusted with $50k and instructed to use that money towards youth educational classes.  Thinking that the money should instead be allocated towards more urgent matters, John uses the 50k to fix the church’s plumbing problems.  John did not personally benefit from this specific use of the money.  He is therefore not guilty of embezzlement.

Intent to deprive the owner of the use of the property

A conviction for embezzlement requites that the defendant intended to deprive the property owner of the property or its use for whatever period of time, even temporarily.

It is important to note that an intent to return the property or repay the money is not a defense to a charge of embezzlement under California Embezzlement, PC 503.

For example, John is a treasurer of a church. John removes $50k form the church’s charity fund and uses that money to pay for his son’s college tuition. John has every intention of returning that money to the charity fund.  Nonetheless, John is guilty of embezzlement.

Penalties for California grand theft, Penal Code 487 PC, will apply if the property involved is either:

In addition, if a defendant is charged with embezzling several sums smaller than $950 but which add up to $950 or more over the course of a 12 month period, the offense will be considered grand theft embezzlement.

Grand theft embezzlement is usually a wobbler.  This means it may be charged as either a misdemeanor or a felony, depending on

However, grand theft firearm is always treated as a felony

Felony grand theft embezzlement can result in the following penalties:

Felony grand theft embezzlement of firearms can result in the following penalties:

Also note that if the felony embezzlement results in a very high monetary loss to the rightful owner, the defendant will face an additional and consecutive sentence.

These sentence enhancements for felony embezzlement of high-value property include:

Under Penal Code 488 PC, Petty theft is a misdemeanor in California.

The potential penalties for petty theft include:

Embezzlement against a victim who is elderly or who has a mental or physical impairment is punished more severely, resulting in additional charge and penalties for elder abuse under California Penal Code 368 elder abuse.

Voluntarily returning the property before one is charged with Penal Code 503 embezzlement is not a defense but a mitigating factor that may shape the sentence.  Imagine that, in the example above, John returns the money $50k to the charity fund before the church discovers John’s actions.  While John is still guilty of embezzlement, his returning the money before his conduct was discovered is a mitigation factor that may result in reduced charges.

To obtain a conviction for California embezzlement, a prosecutor must prove that you intended to deprive the owner of his/her property or of its use, even if for a short amount of time. If the prosecutor cannot prove this intent element, you cannot be convicted.

A number of other offenses often accompany a charge of Penal Code 503 embezzlement.  These offenses include:

Penal Code 470, California's forgery law, makes it a crime to knowingly alter, create, or use a written document, with the intention to commit a fraud.

In California, "Fraud" broadly refers to an act that results in an unfair or undeserved benefit for the defendant and that causes harm or loss to another person.

Some types of fraud may be prosecuted as embezzlement in California. Others are prosecuted under specific laws for offenses such as

Misappropriation of public funds means that a person who had control over government funds (often someone who works for the government) takes, uses, or lends those funds without the authority to do so. This charge can also cover fraudulently altering or deleting financial records relating to government funds or creating false financial records. PC 424 misappropriation carries an intent requirement: in order to get a conviction, the prosecutor must prove that the defendant must have known that his/her behavior was illegal OR displayed criminal negligence in his or her failure to discover whether or not the action was illegal. Misappropriation of public money is a felony. Penalties include a state prison sentence of two (2), three (3) or four (4) years.

Not so many people expect to find themselves needing criminal legal representation. However, should that time ever come, you would be fortunate to have the Los Angeles Criminal Attorney law firm by your side. The lawyers here are knowledgeable, and the entire staff is impressive

I had never faced criminal charges before, and the thought that I would spend time in jail overwhelmed me. Hiring the Los Angeles Criminal Attorney law firm was the best choice I ever made in uncertain circumstances. Professional staff and expert attorneys right here. If you ever have trouble with the law, this is where you should run to

Lawyers at Los Angeles Criminal Attorney are highly professional. They gave me helpful advice and legal options when I spoke to them about my situation. I could feel the level of professionalism of the lawyers and the entire staff. I received timely responses to my questions, and my case was resolved successfully. If you need an experienced lawyer to help with your case, I highly recommend contacting the Los Angeles Criminal Attorney

My assigned lawyer at Los Angeles Criminal Attorney was invaluable in assisting me in overcoming my difficult legal situation. His no-nonsense, straightforward attitude and high-level confidence put me at ease, knowing my case was in better hands. His professionalism exceeded my expectations and was available 24/7 to answer my questions. The outcome for my case was not only the best possible one but also one that not even the other lawyers I had consulted before had considered. I highly recommend the Los Angeles Criminal Attorney law firm