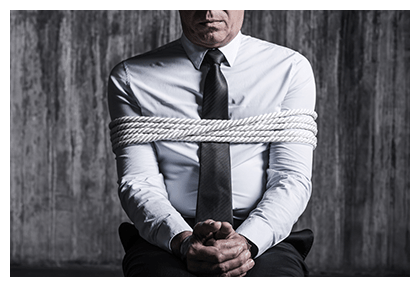 In the State of California, kidnapping is covered and defined under Penal Code 207 as “the act of taking, holding, or detaining another person against his or her will” accomplished by use of force or fear.  The “kidnapper” violates California Kidnapping codes by physically moving another person a substantial distance without the victim’s consent.  “Force or fear” refers to the kidnapper using physical force or injury or using threats of violence or injury to accomplish the kidnapping. Occasionally, fraud may also be considered as a means of perpetrating a kidnapping. Generally, fraudulent kidnapping occurs when the defendant uses pre-planned deception or gains consent of the victim fraudulently. Aggravated kidnapping includes all the markers of a simple kidnapping in addition to aggravating factors such as an underage victim, the serious injury or death of the victim, demand for ransom, and/or violation of other laws relating to kidnapping, such as carjacking.

WHAT MUST THE PROSECUTOR PROVE

To prove you guilty of kidnapping under Penal Code section 207, the prosecutor must prove beyond a reasonable doubt the following:

To prove you guilty of aggravated kidnapping, the prosecutor must prove beyond a reasonable doubt the following:

Aggravated kidnapping subjects you to life in prison.

ELEMENTS OF THE OFFENSE

That you “move” another person

In order to prove you guilty of kidnapping, the prosecutor must prove that you “moved” the victim by more than a slight or trivial distance.  The prosecutor must prove that the movement was substantial.  Whether the “movement” in question is substantial includes factors such as the actual distance of the movement, whether that distance increased the harm to the victim, and whether the movement was done in such a manner so as to conceal your actions.

For example, Jack broke into Jill’s house and dragged her 15 feet from her bedroom to her bathroom with the intention of raping her in the bathroom tub.  Even though 30 feet is not considered a long distance, it is substantial enough for Jack to be found guilty of kidnapping.  Now imagine that Jack dragged Jill from her bed to the door of her bedroom and attempted to strangle her there. This distance will likely not be considered substantial because the movement took place in the same small room.

Note that whether or not the movement is considered substantial enough is a factual determination to be made by the trier of fact, such as a jury or a judge.  There is not designated distance that is considered sufficient or substantial enough to constitute kidnapping under Penal Code section 207.  Note also that, if you are charged with aggravated kidnapping because you also committed carjacking or any other violent felony, the movement must be more than what was necessary to commit the underlying offense. Otherwise, you cannot be found guilty of kidnapping.  For example, Jack puts a gun to Joe’s head and demands that Joe drive his truck about 2 miles to a dark alley. There, Jack kicks Joe out of the car and carjacks the car.  Because moving Jack without his consent was a necessary element of the carjacking, moving Jack 3 miles to the dark alley was arguably only incidental to the carjacking.  In this scenario, Jack arguably should be found guilty of carjacking only.

Without the victim’s consent

Movement is accomplished without the victim’s consent when the victim does not agree to the movement.  That is, either he or she protests to or physically resists the movement.  But note that a lack of consent is not a necessary element of the offense because children and those who are mentally incapacitated are legally incapable of providing consent.

If you use any type of misrepresentation, deception, or trickery to get a victim to move a particular distance, then you have used fraud to commit kidnapping.  For example, Jack went up to little Joe as little Joe was playing outside.  Jack represented to little Joe that little Joe’s father had sent Jack to pick up little Joe. Believing Jack, little Joe got into Jack’s car and drove off with him.   Jack then called little Joe’s father and demanded ransom.  In this scenario, Jack has committed kidnapping by fraud.

Exactly what penalties you will receive for an offense of kidnapping depends on the particular circumstances of your offense.

Aggravated kidnapping is publishable by 5, 8, or 11 years in state prison if the alleged victim was under 14 years of age and life imprisonment with the possibility of parole if the kidnapping was committed for ransom or extortion or for the purpose of committing carjacking, robbery, or sex crimes such rape, oral copulation by force, or lewd act on a minor.  Aggravated kidnapping is punishable by life without the possibility of parole if the victim suffers death or bodily harm or is subjected to a risk of substantial bodily harm or death.

Note also that simple kidnapping and aggravated kidnapping are both considered “strikes” for purposes of California’s three strikes law.  This means that if you are subsequently charged with a felony, your prior conviction for kidnapping will double the punishment applicable to your current offense.  If you convicted of a third felony, your prior conviction for kidnapping will designate you as a “third strike law” which means that you will have to do a mandatory minimum of 25 years-to-life in state prison.

Some common defenses to kidnapping include, but are not limited to, the following:

The victim consented to being moved

If the victim clearly and unequivocally consented to the movement, then you are not guilty of kidnapping.  For example, Jill willingly rides in Joe’s car.  During the ride, Joe sexually assaults Jill.  Because Jill willingly rode with Joe, no kidnapping occurred.

The movement was insufficient

In order for the prosecution to prove you guilty of kidnapping, she must establish beyond a reasonable doubt that you moved the victim by a substantial distance.  A slight or trivial distance is not considered sufficient to constitute kidnapping.

The movement was incidental to the underling crime

The movement has to be in addition to, and not incidental, to the underlying crime.  For example, if you move an individual a certain distance as a necessary part of carjacking his or her car, that movement was a necessary element of the offense of carjacking and therefore cannot constitute kidnapping.

HOW THE LOS ANGELES CRIMINAL ATTORNEY CAN HELP YOU

Actual case: In People v. D.P. (Los Angeles superior court case number VA129147), Mr. P accosted a young woman and dragged her from the front of a liquor store to the front of an alley a few feet away.  Mr. P then allegedly sexually assaulted the victim.  Mr. P was charged with aggravated felony and thus faced a significant amount of prison time. Negin carefully evaluated the scene where the alleged offense took place.  Negin argued that the movement of a few feet was a) incidental to the underlying crime of sexual assault; and b) insufficient as too short of a distance under Penal Code section 207.  Because of Negin’s relentless efforts, Mr. P received a substantially reduced sentence.

Our strategy: Negin carefully evaluates the circumstances of the underling offense to uncover any and all facts and factors that rebut or weak an allegation of kidnapping.  This thoroughness and meticulousness is what made a difference between a substantial amount of prison time and a significantly reduced prison sentence in Mr. P’s case above.

Negin is one of the most talented criminal defense attorneys in Los Angeles. Her passion to fight for every client shows with attention she puts into each case. If you need a great lawyer call Negin she is one you want to talk with.

As a criminal defense attorney myself, I can say with the utmost confidence that Negin is one of the most tenacious criminal defense lawyers. She is an attorney who is not afraid to fight for clients rights to a fair defense.

If there is anyone you want on your side it would be Negin. She is one of the most respected criminal defense lawyers in Los Angeles. If you need a good defense start with a good lawyer that is my advice as an attorney.

Negin is a well respected criminal defense attorney in Los Angeles. You won't find anyone better to defend your criminal matters.